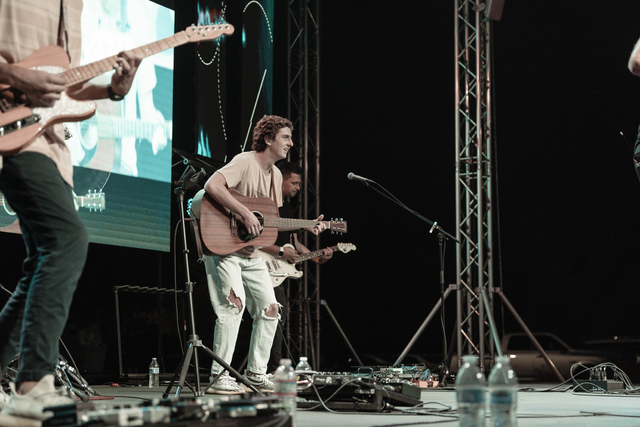 17 years ago Ruslan and Anna had their firstborn child, a boy.  Having a significant meaning to the name they chose, they called him Mark. Mark was born with an instant fever, that had the doctors worried.  After his birth, they took him away for closer observations and tests.  The next morning his parents received news that baby Mark did not pass a hearing test.  The shocking diagnosis didn’t sink in their minds. The next few days were filled with test after test, and every time, it came back the same: the child was deaf.  Doctors prescribed hearing aids and encouraged the parents not to get upset.  What was supposed to be the joy of having a baby, turned into sorrow.  They began to cling to hope in Jesus.

Anna and Ruslan never filled the prescription for the hearing aids, instead, they cried out to God and held onto faith.  The next 6 months were so quiet. It was noticeable that Mark didn’t make a lot of sounds. He was very quiet. One late night as Anna rocked the baby in her arms, Ruslan stopped in the doorway of their bedroom.  With wide-open eyes, he said: “My love, God gave him ears to hear! Our son will hear!” At that moment the shadow of pain and anguish was lifted and left the room. When those words were released, something happened in the atmosphere and Anna’s faith was ignited. She grabbed those words and placed them into her heart. Faith sees the unseen!

They began to worship God for who He is and praising Him for the already won victory in Mark’s life.  Every day they would declare biblical verses of blessings and proclaiming life over Mark.  One week later, Mark was brought for his 6-month specialty doctor exam. When they examined his ears, the doctor said: “He has perfect hearing! He can hear!!” Again and again, they tested him and the results came back the same: his ears opened!  Overwhelmed with joy, Anna ran out of the hospital and dialed her husband: “Ruslan, he can hear!!! Mark can hear!”  This was the first day of a celebration that continues to this day. Changes started happening in Mark, he started mumbling, giggling, laughing, and releasing sounds.  Mark Kalinyuk still releases sounds of the Heavens; singing to the Lord, writing poems, preaching, and sharing with everyone about the goodness of the Lord.  In the park or on a stage, he lives to glorify Jesus.  Mark started miraculously hearing at 6 months and now at the age of 17, he’s a musically gifted young man, who inspires others to worship Jesus! Don’t give up in front of the unknown, never stop believing, and always have hope.  We pray that you and your children come to know the living God. The creator of heaven and earth; God Jehovah Rapha, the one who heals!